In patients with advanced breast cancer AND ER positive AND HER2 negative AND no presence/ impending visceral crisis, the recommended treatment by various international guidelines is hormonal therapy.

Visceral crisis is defined as severe organ dysfunction as assessed by signs and symptoms, laboratory studies, and rapid progression of disease.

For pre-menopausal patients with advanced breast cancer, there are few ways to induce menopause:

Hormonal monotherapy commonly used in first-line setting for women in advanced breast cancer setting depend on which hormonal therapy had been used previously in adjuvant (non-metastatic setting).

Starting from 2015, a new class of treatment, inhibitor of CDK4/6 which prevents cellular DNA synthesis was introduced.

First inhibitor of CDK4/6 approved for use in Malaysia 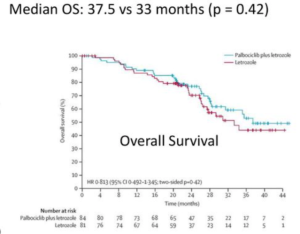 The best treatment strategy can be summarised by image below:

The views, thoughts, and opinions expressed in the blog belong solely to the author, and not necessarily to the author’s employer, organization, committee or other group or individual. The author assumes no responsibility or liability for any errors or omissions in the content of this site. The information contained in this site is provided on an “as is” basis with no guarantees of completeness, accuracy, usefulness or timeliness.

Thank you for visiting my blog.

Actually, nobody will want to read a blog about cancer treatments if not because you want to know more about it for yourself or for someone who is close to you. I hope you found what you are looking for.